No, this is not another space post, but based on the title you might think it is. This is actually what I would consider more of a productivity type post.

My computer setup in my home office is probably very similar to others, where I have multiple computers and multiple screens for each. But, my office setup really only allows for one full size keyboard and mouse that can easily fit on my desk for both computers.

In the past the easy solution to this was to get a KVM (Keyboard Video Mouse) switch. KVMs can be very flexible and work in just about all situations. I was able to use one with my wireless Logitech USB Keyboard and Mouse, but the issue is that I had to manually click a button to switch the keyboard and mouse between the 2 computers (I didn't need to use the video in this case since they were hardwired to the individual computers). Not only do you have to manually switch between the computers but the cables are usually pretty bulky and you have to have them setup to both computers. Some of the newer KVMs do have hotkeys you can setup on the keyboard to switch, but for me this was still not good enough.

Recently there have been many software based solutions that use you existing Wi-Fi or any networking connection to do the same thing as long as both computers are on the same network. I tried different versions of this software like Synergy and Microsoft Garage Mouse Without Borders and none of them worked for me because the one computer that I'm using daily is always connected via VPN to the company I'm working for. Once the VPN connection is started all of these software solutions stopped working because the VPN software "locks" down the network connections and prevented that computer from being visible to the other one. I have read that there are ways to work around this, but it requires getting your networking people to open parts of the VPN, which in my case was not going to happen.

So, based on this I knew that I probably needed a physical hardwired solutions similar to the KVM. Not sure where I saw this online, but there was an article or mention of this new USB solution from J5 Create called Wormhole Switch JUC400. 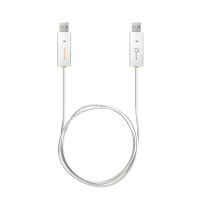 I'm not sure technically how all of this cable works, but the great thing is there is no disc or downloads required. As soon as you plug it into the first computer it auto detects and installs the required drivers/software  (I've only tested this on Windows 7 computers so far) and waits for the other computer to be connected. Plug the other end to the 2nd computer and the same will happen there and then both computers should show messages that they are communicating with each other.

At that point you just move the mouse across the screens and the mouse/keyboard should move to the computer the mouse is currently on. You might need to configure on which side the computers are on, but that is very easy by right clicking on the Wormhole Server icon in the Windows System Tray. Since this is a hardwired connection it works even when I have started the VPN connection on either or both computers. It's also nice in that it is a single regular USB cable. The version that I purchased (JUC400) works on Windows, Macs and even the iPad with the USB connection kit (only the keyboard is usable on the iPad). There are 2 other models, one that works with Windows/Android devices (JUC200) and the other that is just the basic Windows only version (JUC100). All of the versions also offer clipboard/file sharing between the connected computers which is a really useful feature.

The warning that I would give is that this is only a keyboard and mouse sharing solution, you cannot switch the monitors with this cable. The other warning that I would give is that if one of the computers goes to sleep or is locked it might be difficult if not impossible to get the keyboard/mouse to switch over to it. For my setup I always use the laptop screen on one computer, so the keyboard/touchpad is accessible on that computer at all times, so I moved the USB receiver for my keyboard/mouse over to the other computer (which I consider to be my main computer), then I can just use the laptop keyboard/touchpad on the other computer when that does happen. Not a major issue for me, but it might cause others some challenges depending on your setup.