T-SQL Tuesday #41 - Presenting and Loving it! 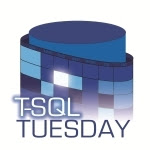 For those that don't know what T-SQL Tuesday is, you can get a brief overview from the host blog for this week @ Bob Pusateri's The Outer Join blog post. The topic for this T-SQL Tuesday is Presenting and Loving it!

When I saw that this was the topic for this week I decided that this would be a good one to jump into T-SQL Tuesday with, since this really is how I got introduced to the SQL Server Community.

I was not really into doing much with presentations at work and I didn't really have to do it much in College either. I had done some presentations in High School as part of various classes, but I was not very good at presenting or speaking in public at all back then. So, it took a lot for me to even consider doing any presentations again after all of these years.

I started to attend the Denver Visual Studio User Group meetings on a regular basis about the same time that I started to learn C# and .NET and found that I was learning a lot from those meetings and wanted to share some of my knowledge with the group. I had been applying my C# skills to build custom .NET web front-ends for Reporting Services right after it went live in 2002. Since that was such a new product it was something that lots of people wanted to know about, so I created a couple of intro 30 minute presentations and did them at the DVSUG meetings and received a lot of positive comments about expanding on it. From there I created a series of labs that I presented over multiple separate meetings which helped bring many members back to those lab sessions after some low attendance was threatening to cancel them entirely.

From there I got to know the people running the Denver SQL Server User Group and decided to make the step to volunteer for the Board and help to build the local community in even more direct ways. Just as my career progressed from a COBOL programmer to .NET and then to a SQL Server BI Developer and now a BI Consultant, I have seen my role in the local community grow the same way and it all goes back to that first thought of wanting to share something that I had been working on with others. I have been rewarded many times over by presenting at many different User Groups and SQLSaturdays across the country (that is the great thing about being a consultant is you can use the trips for work to visit/present at other groups) and hopefully being able to present at the PASS Summit in the near future.

If you are thinking about making that step to share and present your ideas, DO IT! It is the one thing that I did all of those years ago that I have never regretted and always encourage others to do it to. Yes, we all get nervous before getting up in front of people to speak, but you can harness that nervousness and use it. Just contact the leaders of the group that you are interested in speaking at and they will give you all of the support you need to be successful at presenting. All of us User Group Leaders are always looking for new speakers in our communities, so if you haven't done it yet, WHY NOT? It was worked out so well for me that my job at Pragmatic Works even has presenting as a big component of the job description and it was one of the main reasons for going after the position there.
Posted by Steve at 4:19 PM