Sorry for the late post, but I'm still recovering from everything that has happened over the last 2 weeks and on top of that I'm still on the road.

Just as PASS Summit 2013 in Charlotte ended (see my post from earlier this week about everything that happened there), SQLSaturday #237 BI Edition began! SQLSaturday #237 was in Charlotte on 10/19, but the activities leading up to it started with the Speaker Dinner on Friday at Blackfinn in the EpiCentre shopping area. Even after going to many different places in Charlotte the previous week I had not yet been to Blackfinn and regret not going there earlier as the beer choices and menu is great. The Speaker Dinner for SQLSaturday #237 started at around 6pm, I got there a few minutes early as I was at my hotel room just up the street recovering from helping tear down the Pragmatic Works booth. The dinner was great with lots of very active discussions going on and over 30 people there. When the dinner finished off there were some ideas of finding another place to go to and there was also the QCity BBQ Festival going on as well. I was pretty tired from all of the previous week's activities so I decided to just go back to my hotel and rest.

I decided to sleep in on Saturday and get the chance to wake up without an alarm for one of the first times this week. I missed the opening keynote and the first session, since I didn't get to the Central Piedmont Community College (CCPC) Levine Campus until around 10am. As soon as I got there I could see that things were in full swing with the organizers (Javier, Jason, Rafael and Melissa) and volunteers all keeping everything running very smoothly. The setup at the location was very easy with just a long hallway that most of the rooms were right off and all of the drinks/food that you could ask for throughout the day. My session wasn't until the last slot of day, so that gave me time to see a couple of sessions and get some lunch. Sessions that I sat on were great and attendance was very good from what I could see in all of the rooms. My "SSIS 2012: More Than Just a Pretty UI" session is the one that was selected for this event and I had around 20-25 people in it, which is great for the last slot of the day. There was a lot of interacting in the session, especially in the section where I covered the new Project Deployment model in SSIS 2012. Hopefully everyone that attended got something out of the session and from the feedback I received it sounded like they all enjoyed it.

After the event finished with the raffle giveaways a nice sized group of people headed over to the Beantown Tavern in Matthews for the after party. This was very well attended by both the speakers, organizers, volunteers and attendees. The bar appeared to be a bit unprepared for the number of people that came and had some issues getting orders flowing. I hung around until most of the people had already left and we found out that a bar just behind was going to host Karaoke that evening! Oh yeah, more #SQLKaraoke! Kristopher's is where we ended up and the karaoke didn't start there until 10pm, so we had some time to kill. We started spreading the word to everyone else that might still be in the area about #SQLKaraoke and we did end up getting some others to come over and join us, had around 10 or people there in the end. By the time we got to 1am everyone was looking pretty tired and we knew that we still had a 30 minute or so drive back to Charlotte Uptown, so we left and made the trip back to Charlotte.

Another great SQLSaturday event that I was glad that I was invited by Javier, Jason, Rafael and Melissa to speak at and thanks to all of the volunteers that helped them along with all of the other speakers that made it such a great event. 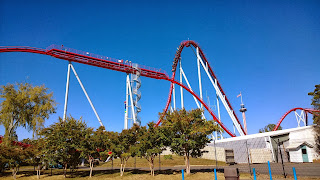 My post PASS Summit 2013 & SQLSaturday #237 activity on Sunday was to head down to Carowinds amusement park and ride some more #SQLCoasters that I have yet to be on. For those that don't know I have been a coaster enthusiast for most of my life, thanks to my Aunt Margie getting me on a coaster in Cedar Point (if you have never been to Cedar Point, it is the BEST coaster park in the world and yes I know they also run Carowinds)! Got to the park just after it opened at 10:30 and I was able to ride every single coaster and a few of them at least twice within 2.5 hours! If you have not been on the Intimidator coaster at Carowinds, I highly recommend it! Probably the most air time I have ever had on a coaster and one of the smoothest rides ever as well. After that I headed down to Columbia, SC to work the next week onsite at the client's offices. The perfect ending to a fun filled week in the Charlotte area!
Posted by Steve at 5:42 PM