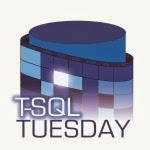 It T-SQL Tuesday again, and for this month's topic it is about the Stuff We All Get (Stuff sometimes replaced with another word) or SWAG!

I have been going to technical conferences since around 2000 when I started going to TechEd and PDC as a .NET developer and PASS Summit for the last 7 years along with the short-lived Microsoft Business Intelligence Conference. Through all of those conferences as you can imagine I have received a literal ton of SWAG.

While the conference bags are usually really nice and I do end up using some of them afterwards (I hate using them at the conference I get it for though because I'm afraid of mine getting mixed up with everyone else's). I'm going to pick my one favorite as something that I pack for almost every trip and grab to take with me almost every evening in the fall and spring. 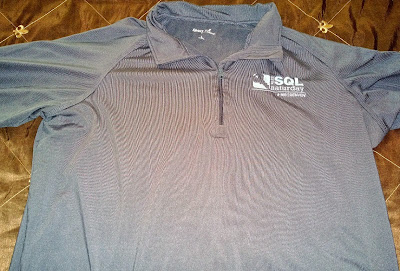 This is the pull over that was given to all of the speakers and organizers of SQLSaturday #169 in Denver 2012! We debated on what we were going to do for a speaker shirt to be different that year and since our SQLSaturday is in late September, we thought it would be great if it was a pull-over that could be worn over any other shirt on those colder evenings/morning. We even had a version for women that was slightly different, in that it was cut more for women in the middle and had the holes at the end of the sleeves so that it could be pulled down on the arms and would not roll up. I actually like that we didn't do that for the men's version since I tend to pull up my sleeves sometimes.

That is definitely the one bit of SWAG that I have received over the last 13 years that I really like and use a bunch. Looking forward to seeing what the SWAG will be next week at PASS Summit 2013 (if you haven't registered yet, there is still time and use code SUM521CH to get $150 off!). For those of you going to Summit, see you next week! :)
Posted by Steve at 8:52 AM